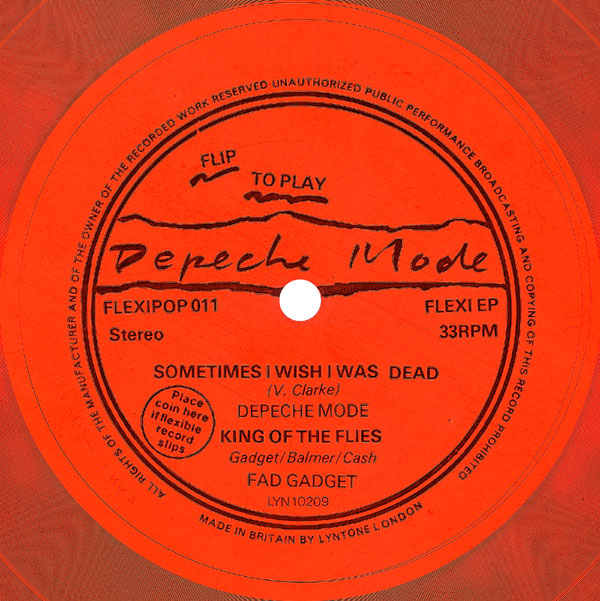 So today, I found this flexidisc at one of my local shops.  It was originally issued with a magazine called “Flexipop” which used to give away exclusive tracks by emerging artists (this was emerging artists of the early 80’s).  This release is probably one of only two from the series that are really collectible (the other being the early version of “Lament” by the Cure – a more finished version would feature on their “The Walk” EP, but the version on the flexidisc is actually Smith + Steve Severin of The Banshees, making it the first release by their side project The Glove).

This was a Vince Clarke composition from Depeche Mode’s “Speak & Spell” era, making this one of the few releases where Clarke was a member of DM.  It was all Clarke in the studio, with singer Dave Gahan providing the vocals.  In a book on DM, it was apparently Clarke’s ability to write and record all the instruments (save vocals) on this track by himself that gave him the idea that he didn’t need DM, and could instead branch out and perform with whichever vocalists he wanted, and not be constrained by a ‘group’ hierarchy.  But, solid group lineups tend to sell better than some boffo studio genius plus random vocalists, and so Clarke’s other best-known works are when he performed as part of a group – first as half of Yazoo (Yaz in the US) and then as half of Erasure, his longest-running project.  It’s a good song, but it sounds very 8-bit, as a lot of early synthesizers tended to sound – you either got deep and rich, or thin and tinny.  Being a ‘flexible’ record means the sound is fairly crap, even if the record is in great shape.  It’s since been reissued as part of DM’s “Speak & Spell” on solid 180-gram vinyl, but it’s still cool to have this early, original version in my collection.