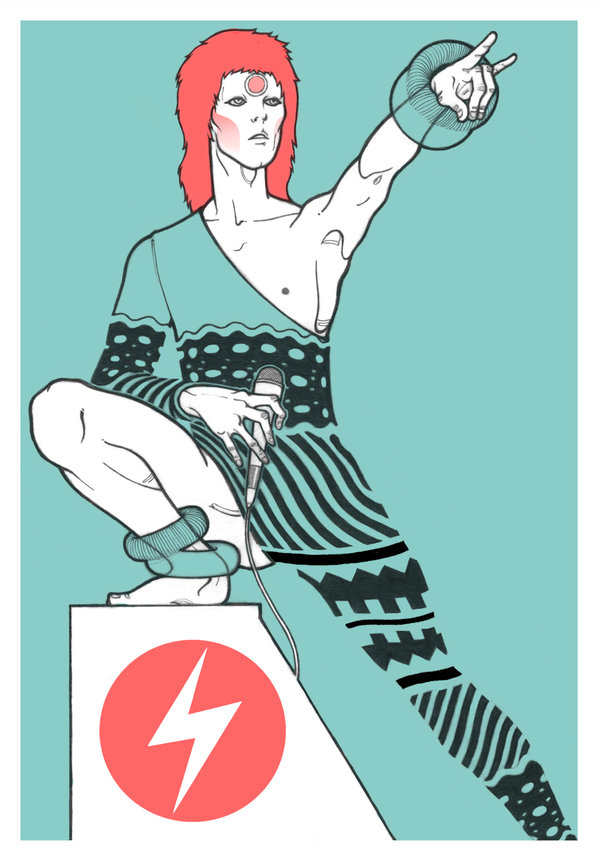 Today is the anniversary of Bowie’s first live performance ‘as’ the character Ziggy Stardust.  Bowie had spent months preparing to ‘inhabit’ the character of a hedonistic alien bent on saving the human race, developing his persona, designing costumes for himself and his band, and getting ready to ‘live’ as Ziggy.  It was his hope that this ‘inhabited’ character would propel his career in ways that hadn’t happened yet.  Premiering at the Tolworth Toby Jug in London on this day in 1972, the performance wasn’t an overnight smash.  Truthfully, the Hunky Dory album was still in the shops, and the songs that comprised the Ziggy Stardust and the Spiders From Mars album, though mostly written, produced, and recorded in November of 1971, (a last few tracks would be put to tape in February of 1972) wouldn’t appear in the shops until June of 1972.  But it was common for acts of the time to be premiering new material live on stage prior to the release of an album.  But the early leg of the tour was a dud.  When Bowie finally performed “Starman” on Top of the Pops in July of 1972, he’d already been performing this new material for 5 months to little fanfare.  His ToTP performance changed that – TV helped catapult Bowie, as much built on image as on sound, into the hearts and minds of more performers than he could have hoped to reach with only album sales and tour receipts.  The performance was slightly scandalous, with Bowie having made remarks to the press that he was gay, and the appearance on ToTP showed him draped across his guitarist Mick Ronson, insinuating something naughty.  The orange mullet, odd jumpsuit, and silver circle on his forehead were revolutionary in rock costuming.

This brought Bowie the newfound notoriety he’d been looking for.  As the Ziggy Stardust tour progressed, Bowie crossed over to the US, then back to England, the US again, then over to Japan (in April of 1973), and finishing the world tour in England.  Nothing lasts forever though, and on July 3, 1973, Bowie ‘retired’ Ziggy Stardust live on-stage.  During this nonstop tour, Bowie was able to produce a follow up album, Aladdin Sane, featuring perhaps his most famous look, the lightning-bolt face.  It had been a wild 20-month ride that changed rock music forever.  It brought glam to the forefront as a viable musical genre.  It taught aspiring rockers how to invent characters for them to inhabit.  It presented a credible take on the ‘concept’ album.  It made David Bowie a bonafide rock star.  Not to mention it produced one of the best albums in the history of rock music, one whose blueprint can be heard in songs still being released today.  Here’s to Ziggy.